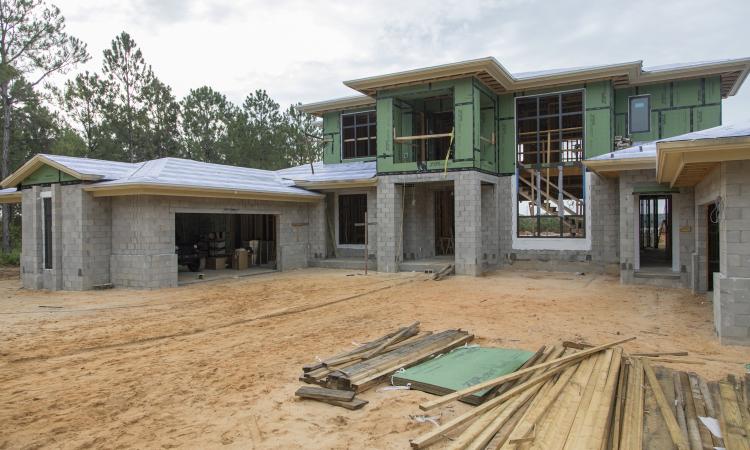 The inevitability of inclement weather is just part of home building. But there’s a big difference between dealing with a winter snowfall, for example, and withstanding a vicious hurricane.

Orlando was spared from Irma’s Category 4 winds that hammered many other portions of the state, but both homes had been prepped for the worst. By securely wrapping their dumpsters and strapping down every single piece of equipment, neither project suffered any major losses.

The only real loss was time. And the builders — already faced with accelerated 12-month schedules — didn’t have much, if any, time to spare.

“Delays with the windows ate up at least 8-10 weeks of our schedule,” said John Kolb, VP of construction at Legacy Custom Built Homes. “They were manufactured in Las Vegas, and they were being transported [through Texas] just as Hurricane Harvey came through. Then they were held up again in Mississippi because of Hurricane Irma.”

Since the windows were finally delivered and installed, Kolb said the project has really picked up steam.

“That’s the turning point in a project, and the fun begins — when we’re no longer limited with what we can do, so we’re free to get as many trades into the home as possible, get the finishes in and see this home come to life,” Kolb said.

One of the ways to compensate for the lost time, the build team of TNAH began installing the flooring even before the drywall was up. And during various holdups on the first floor, work and inspections were completed on the second floor to keep things moving.

“That’s not typically the preferred sequence. But you’ve got to do what you’ve got to do to get this done because I’m pretty sure no one is going to change the date of the [International Builders’] Show this year just because our windows came in late,” Kolb said lightheartedly.

For TNAR, windows were not the issue — it was the landscaping.

“Many of the tree farms and nurseries in South Florida got hit hard [by Hurricane Irma],” said Caron Farina, head of marketing for Farina & Sons, Inc. “So we were having issues getting the products we needed and we’ve had to make some changes in order to stay on schedule.”

But getting the products for the landscaping and pool area is still less of a challenge than scheduling workers to install them, Farina said. Many parts of the region are still recovering from the storm, so area landscapers are struggling to keep up with demand.

“Certainly we wish we had more time, but you just have to roll with the punches on a project like this to keep it on track,” Farina said. “We love what we’re seeing as the home comes together, and we know people who come and see it during IBS will just be amazed.”

Both homes are set to debut during the 2018 International Builders’ Show in Orlando, Jan. 9-11. For more information, go to tnah.com and tnarh.com.